I walked 9.46 miles last week. I was actually doing really good and then it rained, and I mean RAINED, for 4 days straight :(

My menu plans are a rough guesstimate. I don't often "feel" like what I've planned lol But this is generally what we'll eat this week.

Linking up with Southern Living Yankee and I'm An Organizing Junkie
Posted by Sandra (Sam) at 6:25 PM 1 comment:

I got one of those Father's Day surveys for kids (and I'm a bad blogger and totally forgot to mark down where I got it, so if it's your design, please let me know and I'll credit you!). I thought Olivia would be the perfect age for funny answers. I was right! 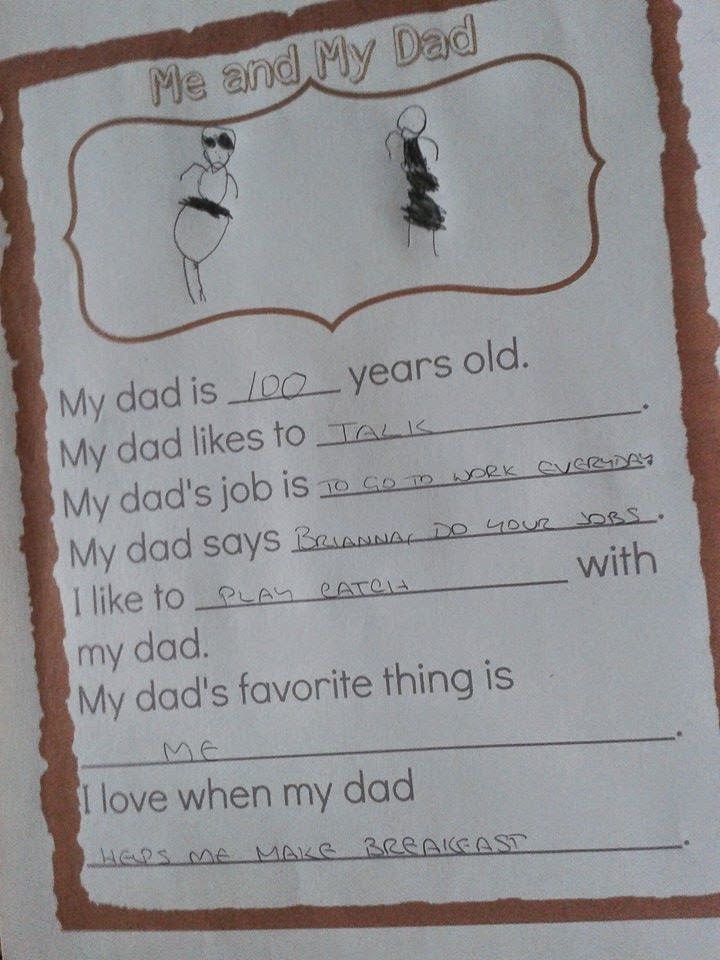 She couldn't think of how old he was saying "well, he's not 5" I said "no, he's a bigger number." "100 is a big number! He must be 100!" And does she ever know her father in "My dad likes to talk" LOL Lee will talk your ear off and he doesn't care if you're his best friend or a stranger!

Our oldest, Dylan, came for a visit with his mother in the afternoon. Brianna was with her father for the day, but at least the little kids got to see him


This week (and last) we did our country study on France.

Brianna started on Geometry (final chapter for Gr. 5!!!) in math and is over the moon to finally be able to play with her math set. 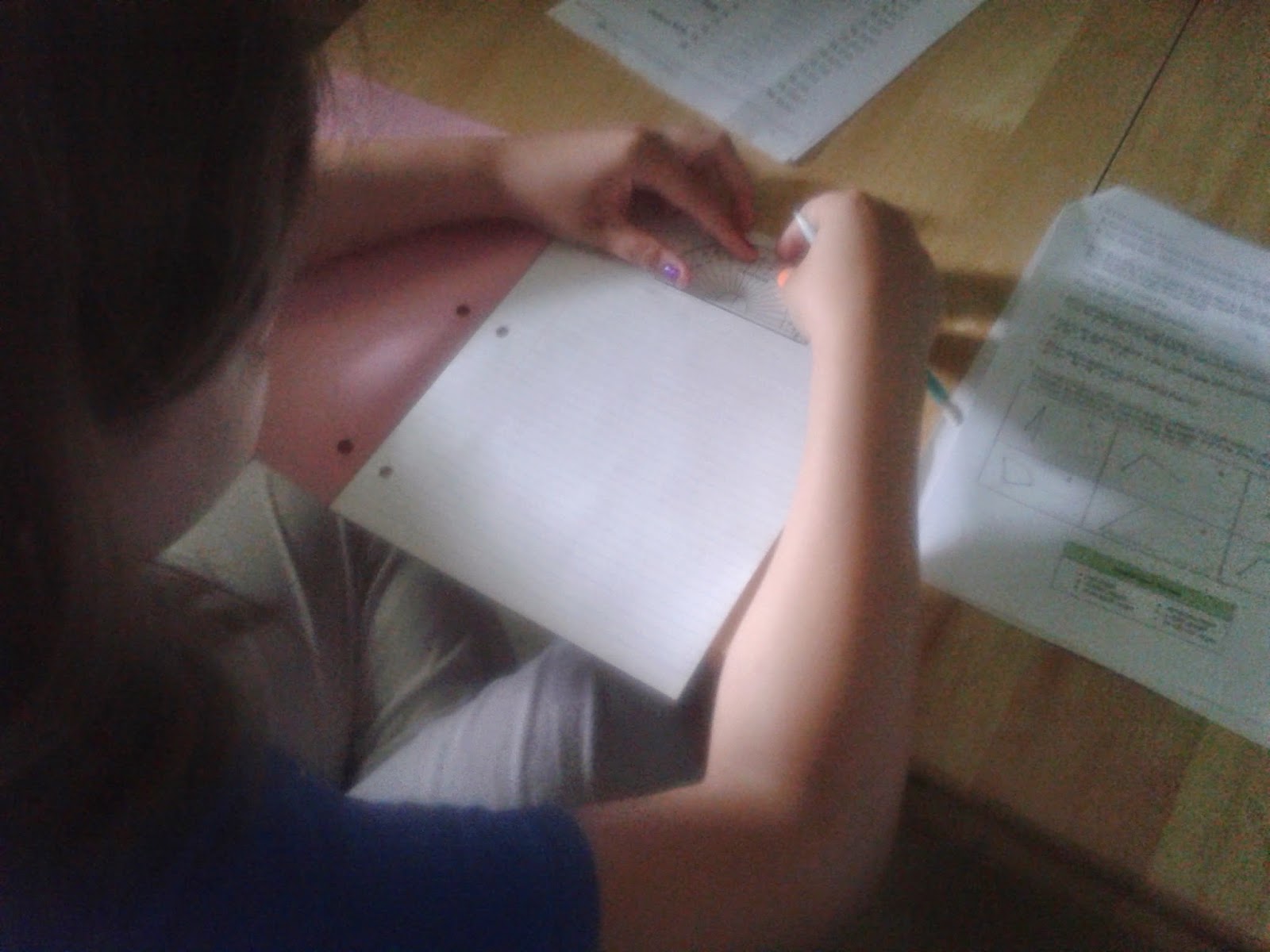 Olivia continued with her You Can Read program, still on the words: the, a, and, see

Linked up with Weird Unsocialized Homeschoolers
Posted by Sandra (Sam) at 4:44 PM 1 comment:

Next up, randomly selected, is France! France took us 2 weeks as the first week was very slow due to various issues.

We started by reading Let's Visit France. It was a fantastic book as it even included several words in French with the pronunciation.

On our globe, Olivia first looked for the USA (for retention) then we looked for France. France of course was a lot harder to find as it's a much smaller country than the USA. 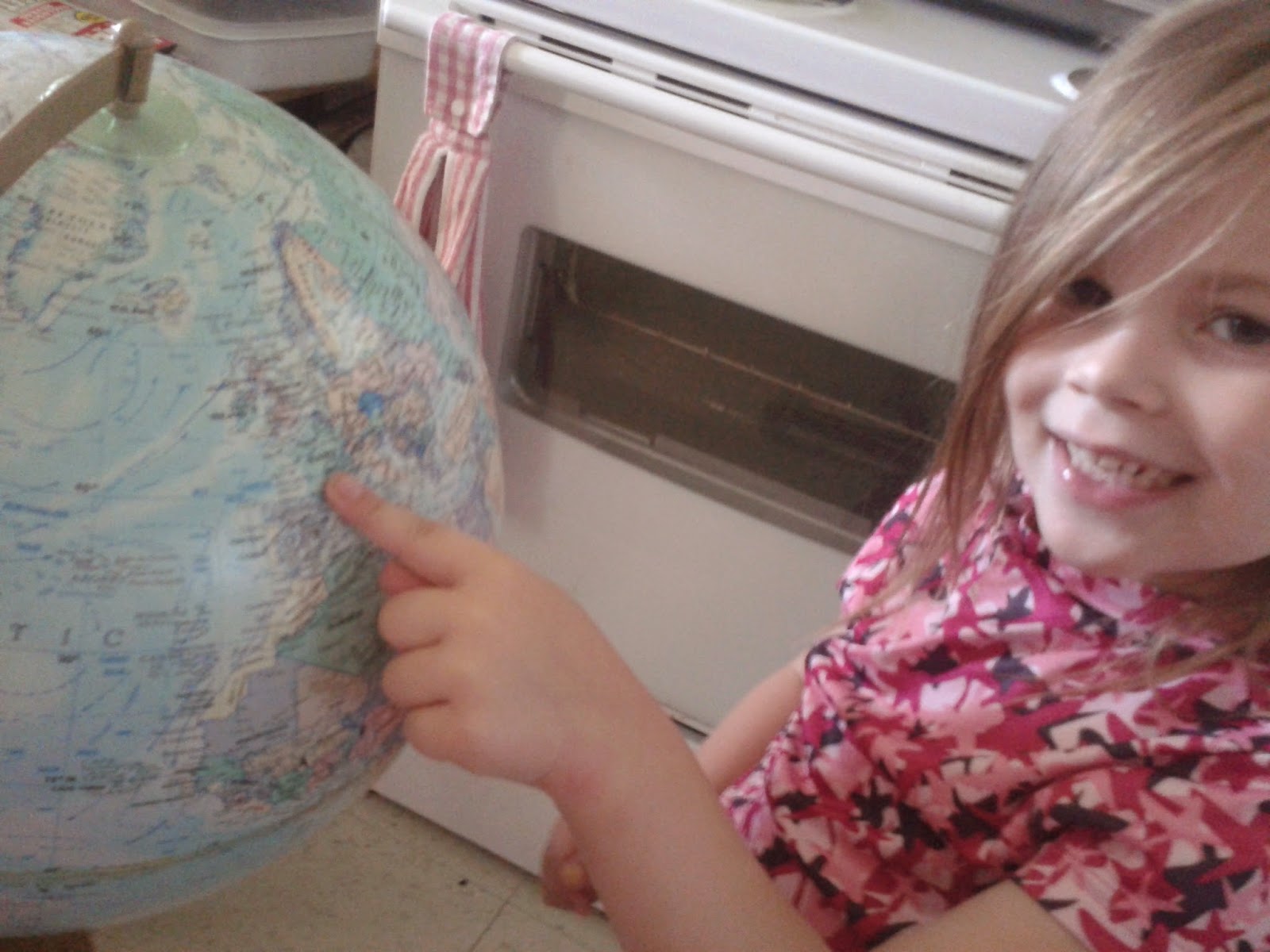 For our country study food we decided on Coq au Vin, gouda, camembert and brie with crackers, fresh real lemonade, baguettes and Bavarian creme for dessert. We had company over for supper too, so got to show off our homeschooling and fancy cooking skills.


I found some great videos for Brianna (they're a little "old" for Olivia) on Discovery and National Geographic. The Discovery one has multiple videos.

Our Eiffel Tower made from wafer cookies can be found everywhere, but I originally saw it here. Ours was pink since we only had strawberry wafers. Brianna thought that was fantastic!

I walked only 5.57 miles last week. It was a horrible, poopy week, motivation wise. This week WILL be better!

3 miles of my distance was Sunday where I went out for a walk with the stroller and my radio on my cell. I walked to the beat of the music. It was a great workout! I'll be doing that more often!! Now that we're into hot weather, the humidity levels dictate how much I can get outside (I actually get sick when it's humid), but I'll be doing as much as I can handle!

Friday
Brianna cooks
Saturday
Out of town = fast food
Sunday
Serve Yourself
Linking up with Southern Living Yankee and I'm An Organizing Junkie
Posted by Sandra (Sam) at 11:19 AM No comments:

This was a slow week as we dealt with upset tummies and more drama with Lee's chemical burns from work (a blog post all on it's own!).

We started on our new country study, this week on France. We'll finish it next week.

Brianna did ratios in math and, again, couldn't believe how easy they were. I'm glad that's she's found the last few units easy after the struggles she had previously. Now that she's done her English curriculum, we'll be doubling up on math until we drop to our lighter summer schedule. (After a mixture of not understanding {but refusing to ask for help} and some very shoddy work ethic, she repeated her entire Gr. 5 math curriculum. She's almost done now, but will finish that up and work on Gr. 6 over the summer)

I finally got Brianna reading age appropriate books. She has a very high reading level but kept choosing to read books in the Gr. 1-3 range. We finally found some young adult books that still covered the interests that she kept gravitating to in the lower level books. I also showed her that the library had a large selection of Lurlene McDaniel books (she found some of mine from when I was a teen and loves them! The ones that the library and I have are all about teens with cancer and such, so they are a little morbid, but they're well written).

We're going back to writing weekly book reports, but in a different manner than before. Previously, Brianna did a form style fill-in-the-blanks book report. She could have easily gotten the information by skimming the book quickly, which she started doing. Now, we're going to do more classic review style book reports. Since she has a lot of issues with putting her thoughts to paper, we'll be doing it dictation style with me typing on the computer while she speaks. This week she chose The Wide-Awake Princess by E.D. Baker. 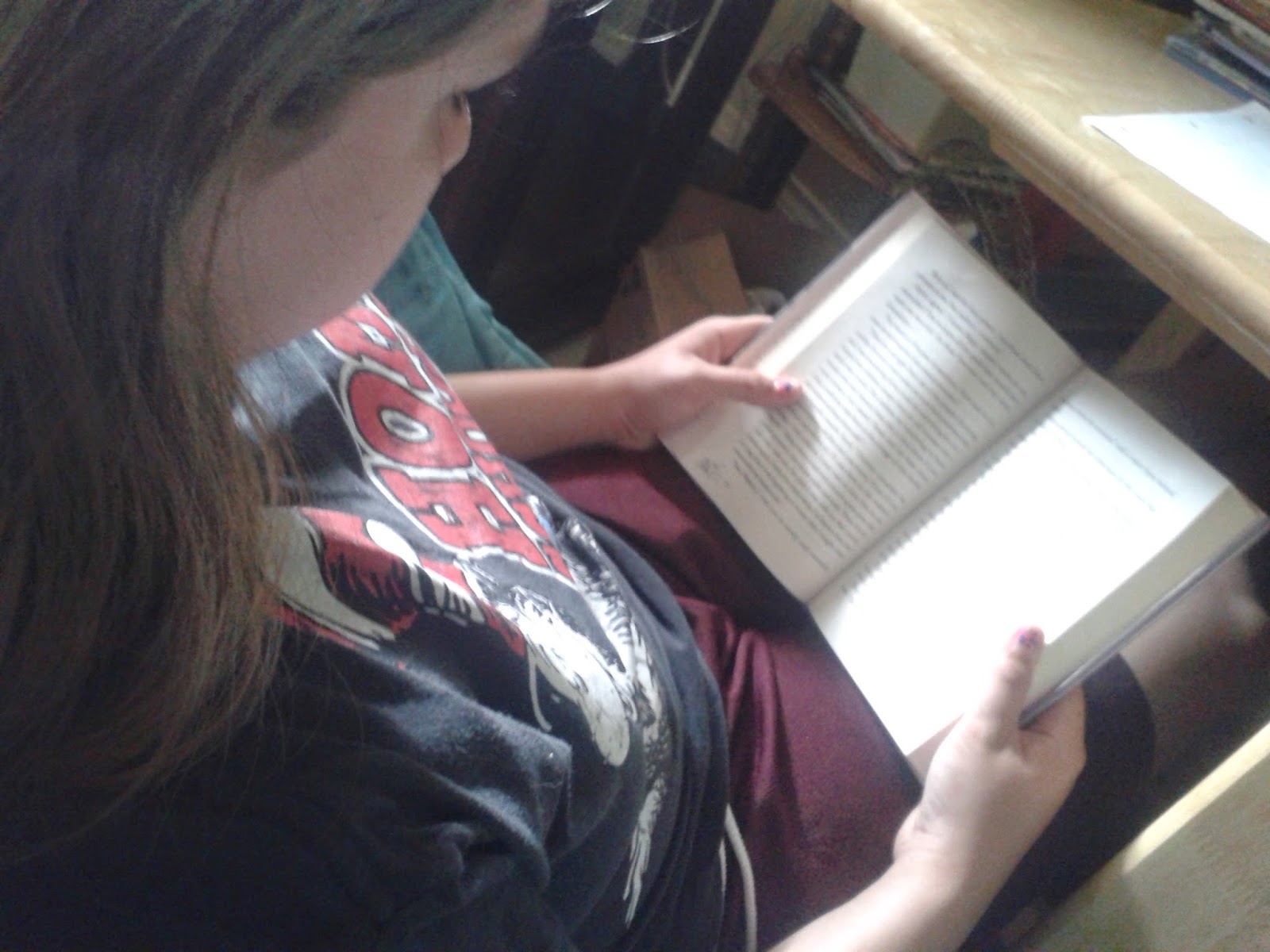 My own homeschooling for the week was learning how to sew a ring sling and travel pouch with this great fabric! 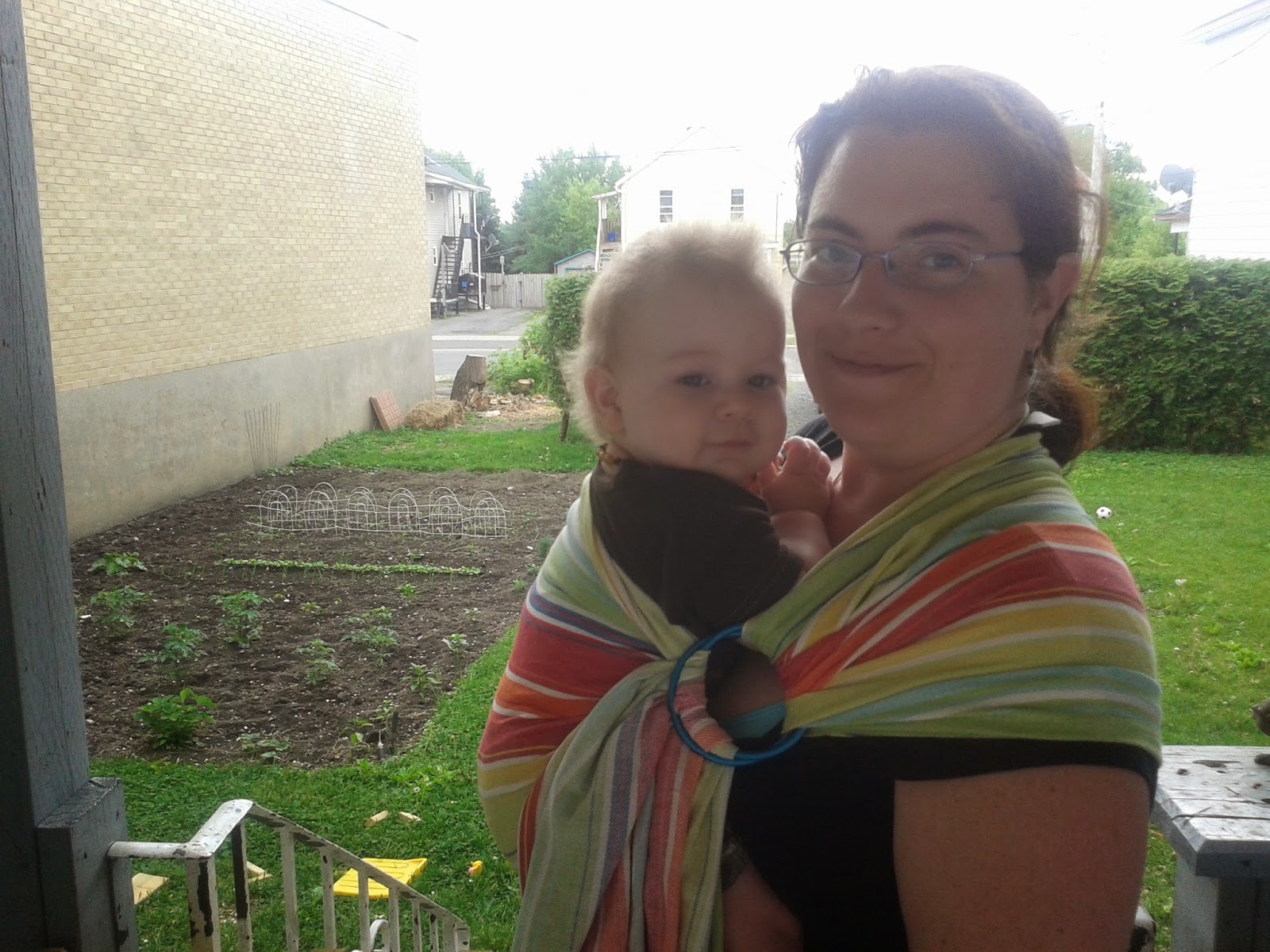 Linking up with Weird Unsocialized Homeschoolers.

I walked only 6.98 miles last week. No excuses other than I suck :(