I read a blog post, which lead me to this article about what happens when children spend 8 hours without technology.

No technology. No internet. No Facebook. No smartphone games. No TV playing endlessly in the background. Honestly, I'm more worried about me than the kids! I run my business online. I do zillions of school things online. I play brainless apps on my phone.

But I think it'll be an interesting experiment. Since we'll be away from the house on and off until Tuesday, I'm going to put it off until then, so we'll be home and get the full effect. So Tuesday, no tech day. From wake up until bedtime. None of this 8 hours crap. Full day of torture! *evil laugh*

I will pin this experiment on screen-type technologies. I'll still use my washing machine and my stove and the like. Silence has always given Brianna and I anxiety (we have several radios in our house that play 24/7 as background noise), so radios will stay on as I'm not looking to set anyone up to fail. But no phones, tablets, TVs, computers, ect....

I may hate me... especially after the kids go to bed. My wind down, internet surfing time.

My first wrap up in over a year and I'm already late! My excuse, it was my mom's birthday yesterday so I was busy....

Brianna re-started working on Khan Academy after a few months. She had been getting frustrated at the topics she had been covering, so we dropped back to just her "paper math" (Math Mammoth). Over that break, I started allowing the use of a calculator for speed purposes. She knows how to do all basic math, on paper and often in her head. However, I noticed that when she was trying to rush, she might put a number one decimal point over and end up getting the question wrong. Since using the calculator her grades have improved along with her general attitude towards math.

Olivia finished up her Food Groups unit this week. It was a learning experience for both of us. Olivia is beyond an extreme picky eater. She has a very short list of acceptable foods and will honestly starve herself to illness if she doesn't want to eat something. Part of this unit was tracking servings across the food groups. While she is severely lacking in the vegetable dept (she won't eat ANY unless it's a fruit/veggie juice or rarely, spinach in a fruit smoothie), she does eat majority of her servings, most days. I found a cute little workbook that covered all the food groups. Olivia's favorite part of the unit was creating a real food food pyramid from our fridge and pantry. 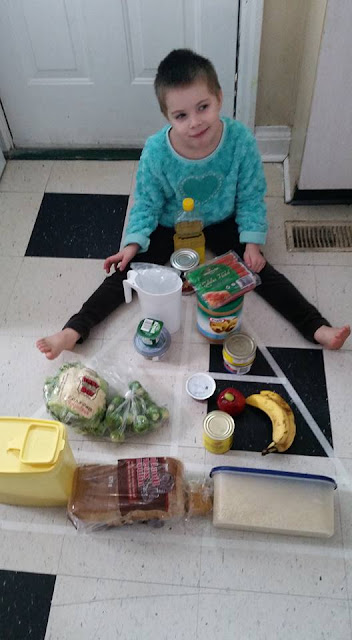 Joshua had another speech assessment. He is improving in the sense of communication but he is still essentially considered mute. He has approx 30 signs and 4 kind-of words (num num, woah, uh uh and yuh (yuck)). Because he is still not speaking and will be 3 in June, he will be set up with weekly speech therapy. The speech lady that we're currently dealing with is going to try to push him into the sessions that start next month, as opposed to the ones his group of assessments is in (April/May).

Linking up with Weird Unsocialized Homeschoolers
Posted by Sandra (Sam) at 10:57 AM No comments:

Alberta (and BC) Bound!

Last summer Lee and I took an epic 3 week road trip, driving from home (near Ottawa, On) to Victoria, BC and back. We car camped and couch hopped. The event being surrounded by the trip was our friend Leslie and his wife April's wedding, in which Lee was the Best Man. It was something I had always wanted to do and was seriously the best vacation ever.

Being that we're a homeschooling family, it was also a great geography lesson for the girls who "followed" us from home. We talked to them each night over Skype and sent postcards through the mail.