Corresponding with our Universal Yum box, we studied Thailand. We had loads of fun opening our first Yum Box. The girls are super happy that I signed us up for it and can't wait for the next one each month. 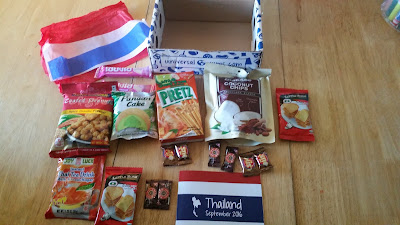 Brianna wrote a report on the 2004 tsunami. This was her best researched report in a while, I think she enjoyed putting it together!
Posted by Sandra (Sam) at 2:53 PM No comments:

Florence Davidson was my Grandmother

My Grandma Flo died this morning. She had a very long battle with bowel cancer that spread to her liver and then lungs. She spent most of the last year fighting it tooth and nail.

I haven't seen her in almost 25 years.

For reasons still unknown to me, I did not even know that she existed until I was about 8 years old. I had been led to believe that my grandpa's 2nd wife was my grandma (by blood. She was still one of my grandmas). Something happened when my father and aunt were small children and they all became estranged.

That year, when I was 8, my father decided to send me to Grandma Flo's for the summer (it did not at all seem strange to me at the time to spend 6 weeks with a woman I had just met. My father said she was grandma, so that was good enough for me). I had the most wonderful time. She was not your typical grandma. She taught me how to roll her cigarettes for her with her tub of tobacco and rolling machine and introduced me to her "pet" raccoons (she lived in downtown Vancouver and there was a rodent problem that she made the best of).

She brought my to the Indian Reserve that we had family on. I didn't know I was Native. I imagine, because I was 8, I was told very little. Grandma Flo said we were Mountain Cree. I never knew the name of the reserve we visited but it was amazing.

The Aunt that we stayed with lived about a 5 minute walk from the Fraser River and every morning we would walk down there to pull in the nets. HUGE, real salmon! I was totally a city girl. I didn't know fish this big existed! Pacific Salmon were the most often caught, but occasionally there was a Pink Salmon in there. My grandma and Aunt and sometimes others would clean the fish on the kitchen counter or table. Sometimes there were eggs. I had heard of caviar, but never ate it. It was salty but I remember liking it. One of the men would grab some of the cleaned fish to hang in the smoke house next door. (REAL smoke house smoked salmon. Most amazing thing ever. I have never found anything like it in any store). I remember watching in disgusted amazement as my grandmother would eat the fish head.

I remember lots of adult talk of the "white man" accusing them (the natives) of over fishing. I remember siting on the banks of the river when they pulled in the morning fish and across the river on a higher cliff was that "white man" pulling up big nets too. I remember my 8 year old "hatred" of the "white man", forgetting that I, too, was mostly white. But at that moment, all I thought of was my new-found Native Pride.

I saw her only once after that summer. I don't even really remember much from that 2nd visit as it was just one day as my father and I drove through.

My grandma was a bit of a gypsy. She was always packing up and moving here and there. Almost always in the lower mainland of BC, but not always. For a while, I kept up with her as best as I could, sometimes speaking to her on the phone or writing letters, but sometimes not hearing from her for years.

My aunt (my father's sister) contacted me a year ago looking for information to contact my father about his mother. While I haven't talked to my father in 12 years, I did just receive the requested information from my grandpa (who isn't aware that I don't speak to my father, or why) and passed it on. I hadn't seen my aunt since I was 5. Thankfully, she filled me in with as much information as she could.

I'm sad that I hadn't seen my grandma in 25 years, but I am glad that my memories of her are all amazing and full of adventure.
Posted by Sandra (Sam) at 11:11 PM No comments:

Email ThisBlogThis!Share to TwitterShare to FacebookShare to Pinterest
Labels: Family

Ok, so I pulled another one of my disappearing acts. I swear my intention is to post regularly! I just swear I see squirrels and rainbows and get distracted lol

I have started Bullet Journalling (more about that later). One of the reasons, is to be less squirrely. One of my goals for May is to get back to blogging regularly. The whole point of this blog is so people can learn about our journey and so me and the kids can have this cool diary of sorts to look back on. I also really enjoy writing!

Teeny up-to-date on us...
Joshua - as of his last speech assessment, he is up to 2.5 years old in speech. This is fantastic as a year ago he had 4 words and relied solely on sign language. He's *finally* starting his 2nd block of speech therapy next week so hopefully we can get that number even higher! We're also waiting on referrals and assessments from the Ottawa Children's Treatment Center for autism, sensory processing disorder and occupational therapy. Joshua also starts soccer this month!

Olivia - in February she joined Brianna in Time4Learning after completing Reading Eggs and Math Seeds. She has already completed Social Studies for Gr. 2 and is 3/4 done science and math in Gr. 2. So we're mostly focusing on English, which has always been her weaker spot, but she's more than half done Gr. 1 there. She loves Brownies and is excited to do her first camp with them this month. She also starts her 3rd year of soccer this month.

Brianna - finally finished all her Gr. 6 work and I swear it's like a light bulb clicked. It took her almost 3 years to finish Gr. 6 yet she's on course to finish Gr. 7 by the end of July! She is absolutely thriving in Pathfinders and graduates to Rangers for next year. She's been working her tail off to sell cookies and fundraise to pay for their trip to England in 2019. She squeezed into her final year of science camp (technically she ages out 5 days before camp but they've allowed to to take part this year). She's been encouraged by the River Institute to volunteer with them next summer (most likely helping with the younger campers group).

Isaac - graduates this year!!! How the hell did that happen! Wasn't it just like, last year, that he started Kindergarten!? He's been accepted into 2 programs at one of the city's best colleges (!!!) and currently plans to do both, double majoring. He's also working with a program there to work over the summer. He may possibly get a couple hours sleep. He has also almost completed a completely drawn by hand, D&D style game with a friend of his. We tested it out this weekend and it was pretty damn fun!

Dylan - has been working full time at the same place Lee is since the fall and has been doing great! While they work for different companies in the same building, he and Lee see each other a couple times a week. Everyone thinks they're brothers lol He had some nerve wracking trips home in the winter due to storms (he has the same anxiety that Lee does and this was his first winter doing any kind of distance driving).

Lee - after a round of (fairly low) winter blues, his anxiety appears to be doing much better. He's in his happy little world at work in wash bay without anyone breathing down his neck. There's a possibility of promotion to days wash bay late in the summer due to someone's retirement that he's really excited about, so we've all got our fingers crossed for that one!

Me - I fell into a food-happy slump over the winter and gained 9 of my hard-earned 40lb loss back. However, now that the weather is nice again, I've been getting out for multiple mile walks a few times a week. My business is slow, as it always is in spring and summer but I'm happy with that as it gives me time to selfish sew! My goal is to have 75% of the family's summer clothes be mama made this year.

So that's us for now. I hope to have a LOT more frequent postings, including a pile of the drafts I was working on last fall. How's everyone else doing in blog land?
Posted by Sandra (Sam) at 9:46 AM No comments: