Brianna loves cooking. She's super eager to learn new techniques and recipes. In fact, one of her favorite Christmas gifts this past year was her very own cookbook. I think she's read that thing cover to cover about 42 times since!

This morning, I informed her that she was making supper tonight and you'd think I told her we were going to Disneyland lol I'd post a finished-meal pic, but it was devoured so fast I couldn't take one. She's already asked to make supper again tomorrow! 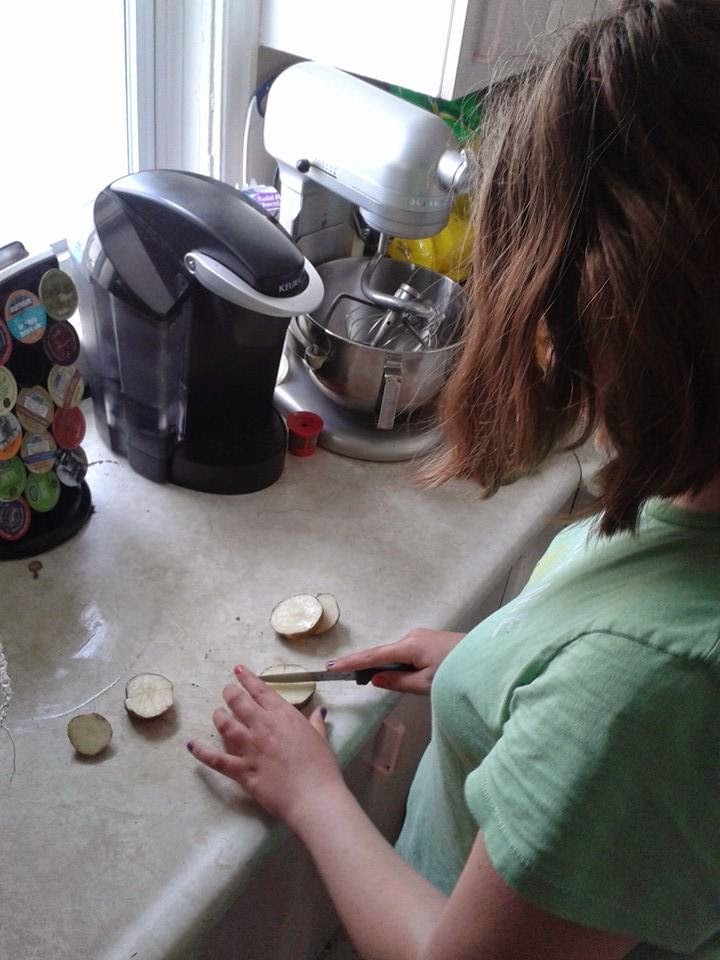 Dump potatoes, carrots and onion in crock pot. Sprinkle (for lack of a better word) pork on top. Whisk spices and water in a bowl and pour over pork. Cover and cook on low 6-8 hrs.

Linked up with Hip Homeschool Moms

My niece, Tanya, has left our homeschool earlier than planned so I'll be implementing our new, totally different school plan sooner than July! I will be taking the next week to move stuff around and get prepared, but I'm totally excited to start this new chapter! Watch for a new "Current Curriculum" post soon!
Posted by Sandra (Sam) at 2:00 PM No comments:

Brianna starts her 4th running season this week. She does several organized runs with training in between. Her training is like anyone else in athletics, it involves her actual sport, running, strength training, stretching (in her case yoga, cause she loves it) and cardio.

Last night I found out that a local charity was putting on an Easter egg hunt. While we're not religious, we do follow a lot of the traditions of typical Christian families, so I knew the kids would love it. I didn't tell them about the egg hunt cause, well, they're kids. I knew I'd hear about it every 5 seconds until the moment we walked out the door.

This morning Joshua was a sweet baby and let me sleep in. A little too late. I woke up to Olivia crawling in bed with me, looked at the time and jumped up. We were supposed to be leaving in 5 minutes! I casually told the girls what we were going to do and needless to say, they cooperated easily in getting ready *really* fast!

The coordinators of the egg hunt set it up that volunteers were going to hide 1,500 eggs around the park. Now, for those not local to me, our park is actually a waterfront green space that stretches about 5 kilometers. Parents were asked to not enter the park until 9am so we took the long way as the quickest way was through the park from our end of town and I didn't know where the coordinators considered the beginning of the park.

We arrived to the main/typical "start point" of the park at 9:02am. We could see a bunch of kids walking all around with their little baskets. Very quickly I noticed no eggs. I thought no biggie, all the obvious ones were understandably grabbed quickly. The girls ran ahead of slow me with the stroller. Walking further through the park, still no eggs. I'm also seeing majority of these kids baskets are empty.

Once I caught up to the girls at the playground I saw the problem. Several children and their supposedly adult parents were at the playground with everything from traditional Easter baskets to grocery bags to *5 gallon pails* FULL of eggs. Were these coordinators helping out the kids? Nope! These were greedy, selfish "parents" who knowingly broke the rules, came to the park early and encouraged their children to break the rules and be greedy and collect as many eggs as possible.

Thankfully for Brianna and Olivia we ran into some friends who's kids shared a couple eggs they managed to find. By this point, Brianna was angry with the people who were unfair to everyone else, but was happy to get one egg. To try to distract Olivia who just didn't understand why people would do this (for that matter I don't get it either), I suggested we go look for ducks along the water and maybe we'd spot some eggs. While we were down there a lovely little boy ran up to the girls and offered 2 of his eggs to them. Again, a child who only found a few.

We continued down the bike path that runs the length of the park towards out house and the girls and I talked a lot about the people who spoiled the egg hunt. We talked about the ways I raise them and how sometimes doing the right thing seems dumb because we lose out, but at least we know in our hearts that we did the right thing.

We made the most of our morning climbing rocks along the water and chatting with the ducks. A trip to Tim Hortons for a treat and a stop at the close-to-home playground may have also soothed hurt feelings a little ;)

Brianna also had a great afternoon as she got pulled over by the police on her bike and given a coupon for a free Dairy Queen treat as a reward for wearing a bike helmet properly while riding! (another always-do-the-right-thing lesson as she was the only one of her friends wearing a helmet and so the only one to get the coupon)
Posted by Sandra (Sam) at 11:37 PM No comments:

Some Pics From The Last Year

Since I've been gone for almost a year, I figured I should throw some pics out there!

I Need My Blog Back

I've been "gone" almost a year. A lot has happened in that time. But I need to be back here. While I love having people follow my blog and leave me comments, really, I write this for me. I'm a sentimental person who loves looking back and reading what I've/we've done and seeing pictures.

I've been putting off this blog. "I'm much too busy." Bullshit. If I have time to virtually wander around facebook for at least an hour a day, I have plenty of time to post here.

A lot of uncertainty has been going on in my homeschooling world. My kids still won't be going to public school, but my niece will be. Over the last year she has left and restarted homeschooling with us 3 times. As of June, she is done with us and will re-start public school in September. The option is always open for her to come back, but this random flip-flopping has put a damper in my enthusiasm about school projects. Come July, we'll learn a new normal.

Joshua's birth last June brought about a big upheaval. Prior to that we hadn't had more than a week break since starting homeschooling in November of 2010. Brianna doesn't take long breaks well. Understandably though, I didn't really care about school after just giving birth. We took 6 weeks off. We may as well have taken 6 years off. Brianna and Tanya seemed to have forgotten everything they learned in the previous year. I was obviously distracted. Thank crap it was summer and we were normally on a very light schedule.

Olivia "should have" started Junior Kindergarten last September (in Ontario, we have 2 Kindergartens, for 4 yr olds and the usual one, for 5 yr olds). A few years ago I had thought about sending her to public school just for Kindergarten, then pulling her out for Gr. 1. When she proved to be almost "done" the 2nd year of Kindergarten (by school standards) before she was due to start her 1st year, I knew she would be bored and end up labelled a "trouble-maker" or something.

I have picked back up my business, LoveBugs Accessories. More than a couple people have insinuated that I'm possibly insane for homeschooling 3 kids, having a baby and running a home business that can require hours of "creating" (for those who don't know, I sew a variety of items, make hairbows and tutus, make crochet hats and the like). While it can be stressful at times (we're trying to "catch up" Tanya as much as possible before PS and it's craft show season), I truly do love it.

So I'm back. I may post several times a week or only a few times a month, but this is important to me and I WILL be posting. 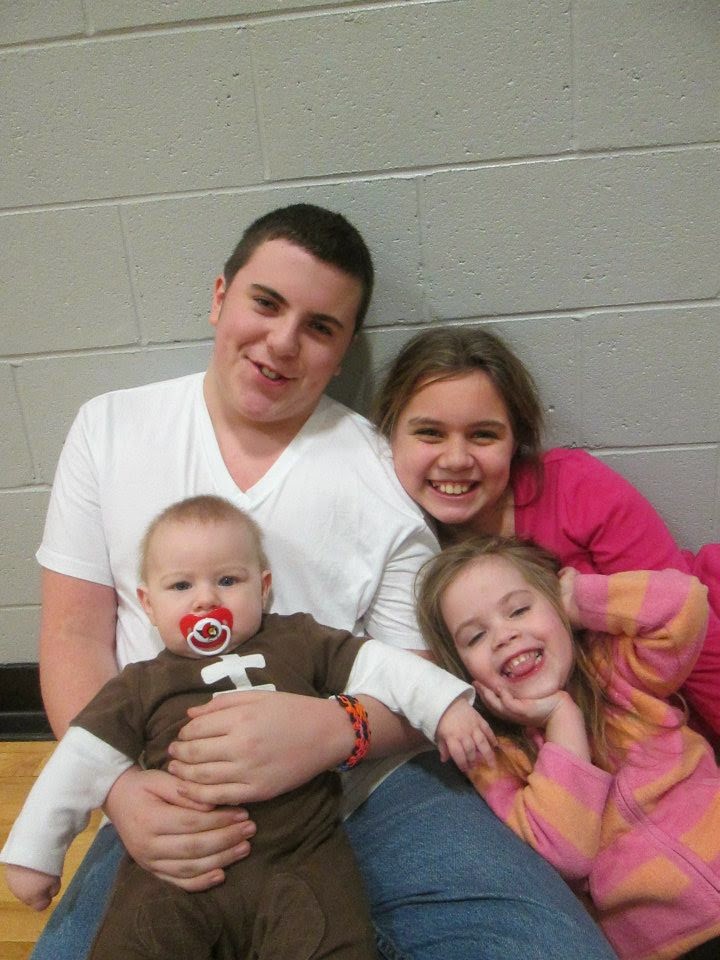